We recently conducted a survey regarding the importance of including environmental studies, including recycling and climate change, in school curriculums.

Our survey has shown that one in three people in the UK believe that schools should prioritise teaching youngsters about the importance of recycling. The research highlighted the point that more needs to be done to inform the next generation about eco-friendliness and how to minimise wastage.

It also clearly highlighted that almost 30% of people want to see schools teaching kids how to prevent food waste, while one in four stated that energy-saving lessons should be on the agenda for those charged with managing the National Curriculum. 11% of the 750 respondents also felt that children need more guidance on saving water.

The government has set ambitious climate change targets, with the UK expected to slash its carbon emissions by 80% by 2050 (set against base levels from 1990). Everybody has a part to play in achieving this, and while it appears the country is on track to deliver, there’s still a general feeling that greater education on the benefits of recycling and eco-friendliness is needed. 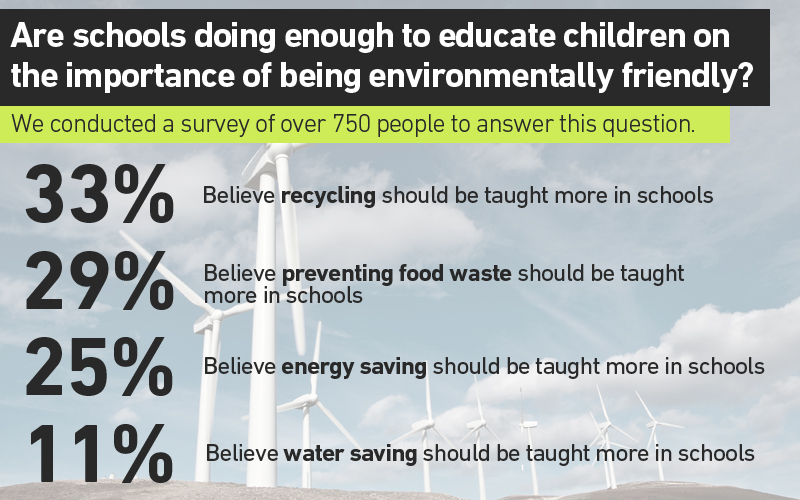 “Our findings show that people still feel there’s an urgent need to teach the next generation about recycling. On the whole, people’s attitude towards recycling and minimising waste have improved dramatically over the years – a point emphasised by an earlier Direct365 study, which showed that as many as 94% of UK homes participate in some form of recycling.”

Despite this, a study published by the Department for Environment, Food & Rural Affairs earlier this year showed that the amount of waste being sent for recycling varied dramatically across different parts of the UK. The report confirmed that at local authority level, recycling rates ranged from 18% to 66%, which underlines the fact that greater consistency is needed.

“It’s vital that the UK embraces a recycling culture that is ingrained into people at the earliest age possible. This is why it is important for schools to support learning both from an environmental benefit point of view, and also how they can impact it; so it forms a “habit” at an early age.

There are plenty of statistics out there that emphasise how much damage we are doing to the planet by sending waste to landfills unnecessarily, and there’s also lots of research in place that explains how much energy and water we’re wasting on a daily basis.

Schools must reinforce this message, whether that means making formal changes to the National Curriculum or introducing a more informal, holistic approach. Bad habits are hard to break, and it’s far easier to maintain an eco-friendly approach to life if you have been doing the right things from a young age.”

Get an instant quote on a recycling service today