Could Standing Desks be the Future?

Standing desks in the modern workplace are starting to gain traction, getting a lot of media attention, in late 2011, early 2012 and have slowly become more and more popular over the years.

Nevertheless, a few multi-million pound companies trying something new doesn’t necessarily mean that a revolution in the way we work is on the way, does it? We’re not so sure. The positive benefits of standing desks greatly outweigh the negatives, and more and more people are turning (back) towards them every day.

The concept of sitting in modern workplaces is only a recent innovation. In the 19th Century, standing was very much commonplace in the workplace, or at home, and people would move around a lot more. It wasn’t until the 20th Century when “Taylorism”, a system of scientific management advocated by Fred W. Taylor, came about which found that it was far easier to supervise, control and monitor workers if they were sat down and had all unnecessary motion eliminated from their day. 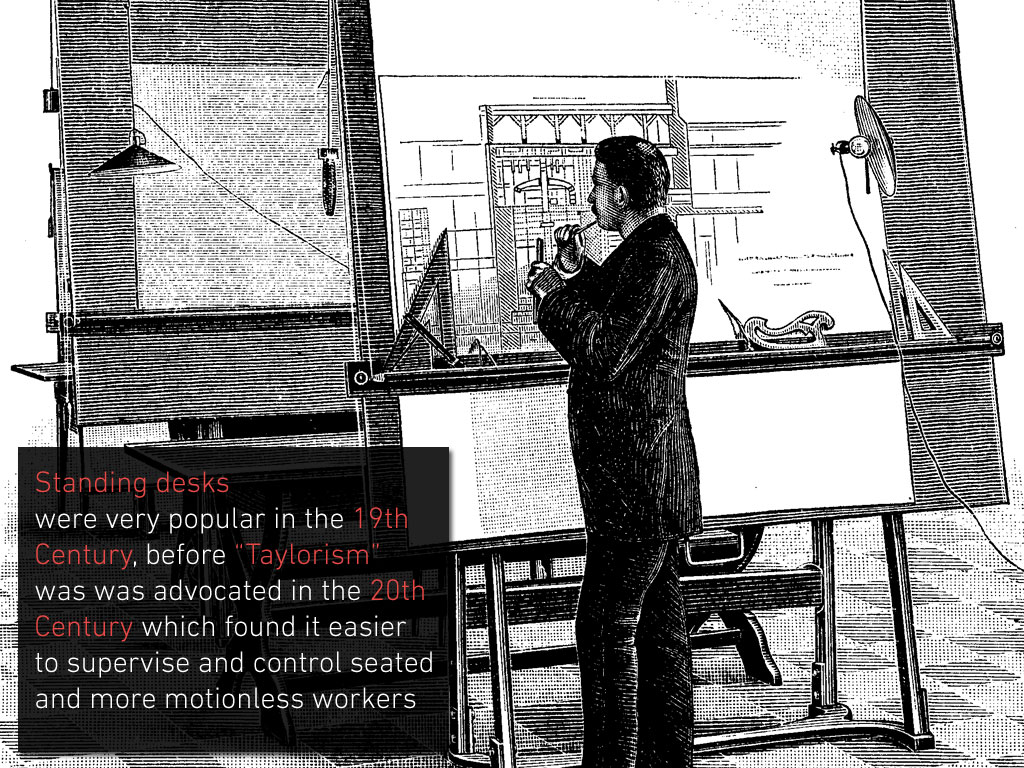 What are the benefits of standing desks?

One point which is always used favourable in the argument of standing desks or no standing desks is the multitude of health benefits from them. At first glance, standing, and exerting more pressure on your joints, can only seem like a hindrance to our health when executed day-in-day-out, but in actual fact standing can be much better for you than you think.

Reduced risk of obesity
Sitting down all day then going to the gym at night “makes scarcely more sense than the notion that you could counter a pack-a-day smoking habit by jogging” says a post in the NY Times. Moving more often and being more active is the most effective way to combat obesity, and a desk that encourages freedom and movement is a sure fire way to achieve this.

Reduced risk of type 2 diabetes
Sitting for prolonged periods of time is correlated with a reduced effectiveness in regulating levels of glucose in the bloodstream. This comprises part of a condition known as metabolic syndrome that greatly increases the chance of type 2 diabetes.

Reduced risk of Cardiovascular Disease
Evidence that sitting for prolonged periods of time goes all the way back to the 1950’s, when research into bus drivers and bus conductors found that the sitting drivers experience far more heart attacks than the standing conductors.

A recent study of adults who spend less than two hours a day sat down in front of a TV or other screen, compared to a group who clocked more than four hours a day of recreational screen time showed that the adults sitting for 4 hours a day had a 125% increased risk of events associated with cardiovascular disease, like chest pains or heart attacks.

Improved Posture
Poor posture is all too easy to slip into, after a long day. In a chair, it is all too easy to slump over without realising. Over time poor posture can impede the ability of the lungs to expand and lead to more and more slouching due to muscle memory and vertebrae alignment which, in the long run, can lead to aching muscles and discomfort when assuming correct posture.

A standing desk allows the blood to circulate more freely, meaning that you have more energy, don’t go dead after prolonged periods of time and are more alert. It is difficult to get sleepy, or feel mentally tired, when you’re stood up as you are constantly aware of your body, and even when stood still – a lot more active than sat down in a chair. 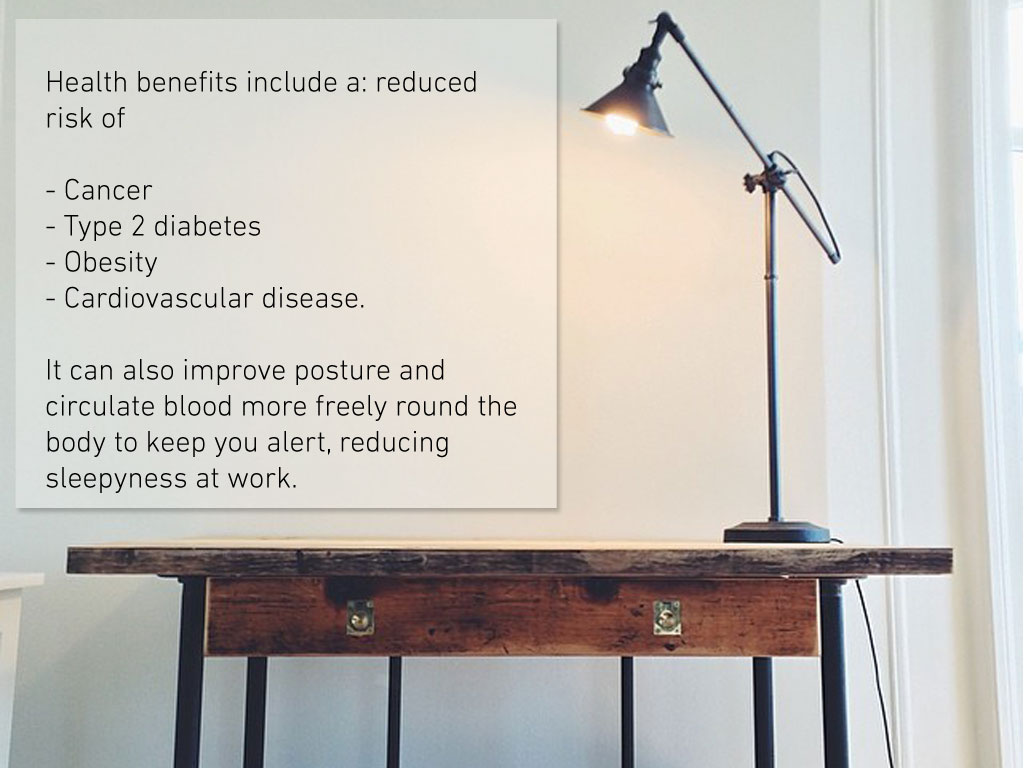 What are the downsides?

Like most things, a standing desk comes with its downsides.

Standing up for 8 hours requires a bit of getting used to. Standing desks can be uncomfortable for the first few days, weeks or months and this can greatly reduce employee morale, or be costly to switch out between standing and sitting desks.

If you currently have back/knee or leg problems, putting pressure on them by standing up for the majority of your day can take its toll on your body. It may be medically inadvisable to use a standing desk, for certain people – if it puts you at more of a health risk than a benefit, it is not worth it.
For companies that have an eat-at-your-desk lifestyle, standing desks can make for an uncomfortable and unrelaxing lunch experience that doesn’t feel like a lunch break at all. If heading to a break room is an option, take it. If not – standing desks could easily become a burden at lunch or break times.

Standing desks, with no option to revert or switch to a seated desk can easily take their toll after long days. Training and preparing yourself for 8 hour days is easily do-able, but 10, 11 or 12+ hour shifts would soon take their toll and be more of an annoying discomfort than anything else.

For deep thinking and thoughtful moments, sitting is often a preferred alternative to standing desks. Sitting down allows you to bench your thoughts and focus purely on the task at hand with undivided attention.

Cost is often a deciding factor as to whether an individual takes up, or an office offers, standing desks. Whilst makeshift alternatives are available, like stacking monitors on books, or propping desks up on makeshift legs, purpose built standing desks vary in price, but overall are often twice as much as standard desks. Buying adjustable desks bumps up the price even more and purchasing both sitting and standing desks for yourself or one employee can very quickly lead to hefty costs and limited space. 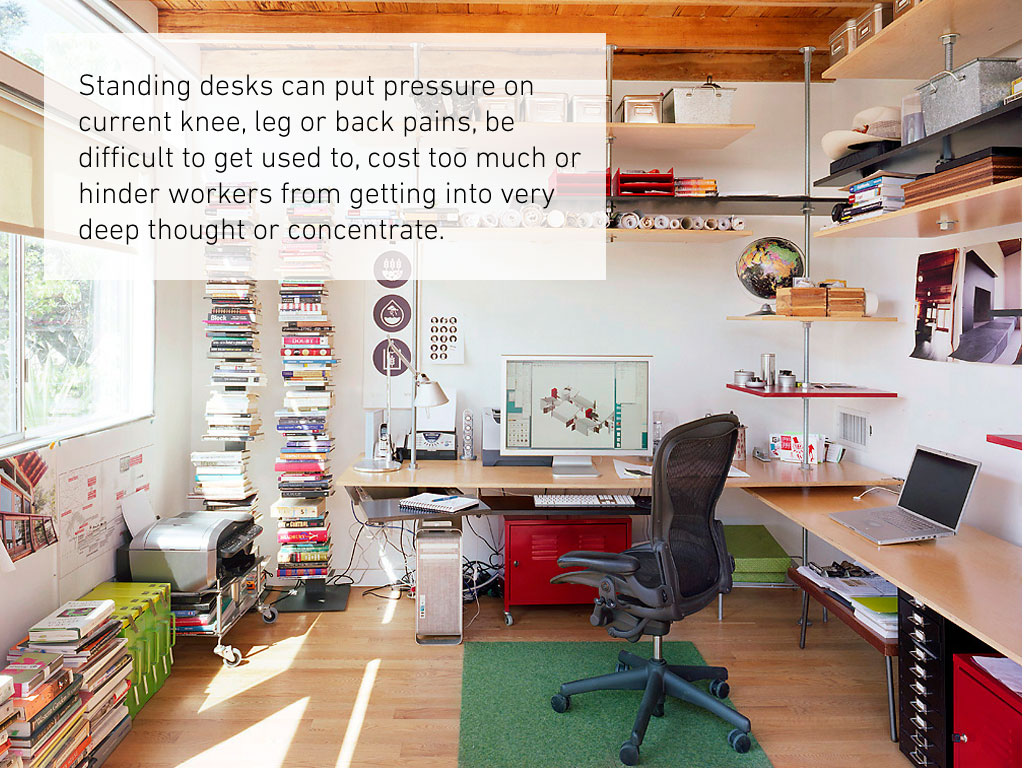 Whether you currently use, or are planning on getting, a standing desk, or you are content with your sit down desk and want to know how to relieve the downsides of it; here are some useful tips to remember to get the most out of it, and/or make the transition as smooth as possible.

What do you think?

We asked some people on Quora what they thought about standing desks, and whether they would consider them for personal or business use, and the responses were varied in reason, but mainly positive.

I would love one! Always jumping up to grab something or running to my computer to look something up and bending awkwardly to access the keyboard. Plus, standing is just better for your body. You know what they say about a body in motion…

Yes, I’d love it because of the posture and health benefits. I’m not sure how practical it would be.  My real desk is 6 ft by 3 ft and I use all of the space.

No. Because I don’t think people who work behind counters at McD’s are necessarily healthier.

Yes. I would put my mini-stairmaster in front of it. I already “reward” myself with extra social-media minutes by perusing my iPad while using my stationary bicycle.It would be great to be able to exercise while working; I have to tear myself away from “the box” every hour or so otherwise. It would probably end up being awful for my eyesight though, not getting the occasional respite.

I was saying just last week that I want a standing desk. I’d wax lyrical about the supposed to health benefits but really I just think it’s a cool fad that makes for a more interesting looking office.
If you were interested in the health benefits, there’s a really good infographic from a few years ago here; Just How Dangerous Is Sitting All Day? [INFOGRAPHIC]

Feel free to stay on the blog, or take a look at what we can offer your business.